If you are new to the world of CBD and cannabis, it can be quite confusing. But have no fear; here we help guide you through the differences between cannabis and hemp plants. Let’s take a look at some common misconceptions surrounding cannabis, marijuana and hemp, and try to make sense of any negative connotations attached to them.

Cannabidiol, or CBD as it is more popularly known, is legal in an increasing number of countries throughout the world.

Currently, only CBD products derived from hemp plants are legal in the UK and Europe, while CBD derived from cannabis plants is still illegal throughout most of the EU.

Although cannabis and industrial hemp both derive from the species Cannabis Sativa and both contain the psychoactive component tetrahydrocannabinol (THC), they are distinct strains with unique phytochemical compositions and uses.

CBD derived from the hemp plant is legal in the UK and most of the EU - as long as it contains less than 0.2% THC.

The cannabis plant is also - confusingly - known as hemp, although this term is often used to refer only to varieties of Cannabis cultivated for non-drug use. This type of cannabis has long been procured for use in the textile industry, for example, from industrial hemp products made from cannabis plants specifically selected because they produce an abundance of fibre.

Cannabis Sativa plants are also used to produce flower, seeds and oils - sometimes referred to as Marijuana - and often associated with high THC products used for medicinal purposes or as a recreational drug. In the UK and most of the EU, any CBD product derived from this plant is currently illegal. Typically, the easiest way to tell whether any given CBD product is legal is if it contains less than 0.2% THC.

Because industrial hemp and cannabis are used for different purposes, selective breeding has resulted in these two varieties differing in their appearance. The majority of THC and other compounds found in cannabis plants are located in the cannabis flower, meaning the more flower, the better. This has led to cannabis plants being shorter and bushier than hemp plants. Industrial hemp plants were largely bred for their fiber, which is mainly found in the stalks of the plant. As a result, hemp plants are taller and skinnier than their cannabis counterparts. 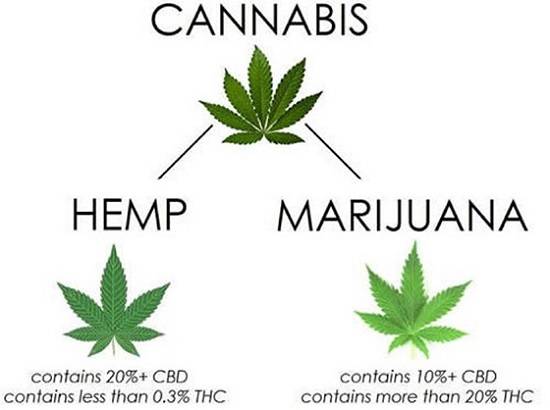 The cannabis leaves have a peculiar and diagnostic venation pattern that enables persons poorly familiar with the plant to distinguish a cannabis leaf from unrelated species that have confusingly similar leaves. As is common in serrated leaves, each serration has a central vein extending to its tip.

TRUE OR FALSE: HEMP IS MEDICINAL, CANNABIS AND MARIJUANA IS RECREATIONAL?

FALSE!  Another popular misconception is that hemp plants are medicinal and cannabis plants are recreational. The reason for this is mainly due to the rise in popularity of CBD products which are touted as a cure-all for everything from anxiety to epilepsy. Although CBD does have the potential to help treat a wide variety of symptoms and diseases, THC is also shown to have medicinal properties. In fact, due to something called the entourage effect, research is showing that full-spectrum extracts from cannabis plants, such as those used in CBD hemp oil, are in some cases preferable to those from hemp plants for certain conditions. In fact, strains of cannabis plants are now developed and grown to produce particular cannabinoid profiles to help treat specific conditions.

Although cannabis can be used recreationally, both hemp and cannabis plants have medicinal benefits. However, because hemp contains so little THC, it is not generally considered as being an effective way to get high. Hopefully in time, the misconception that cannabis use 'must' be recreational will be addressed more widely, and any stigma attached to medicinal CBD use will become a thing of the past.

Join our Email List and get 10% OFF on your first order.

Subscribe to get special offers, free giveaways, and once-in-a-lifetime deals.